10 of the Most Remarkable Holes on Earth

The world is full of fascinating holes, from man-made wonders to natural disasters. Each hole has a unique story and some more explainable than others. While some of these holes have been dug for scientific purposes and others caused by nature itself, some however, have been attributed to extraterrestrial involvement. Whether or not you believe that, it’s entirely up to you.

So let’s get in to it. Here are 10 of the most remarkable holes on Earth. 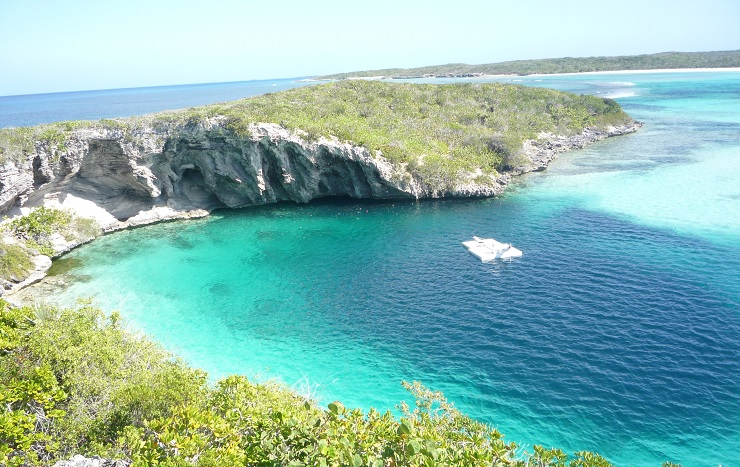 Dean’s Blue Hole is the world’s deepest salt water blue hole known to man. A blue hole is defined by a sinkhole filled with water with the entrance to the hole below the water level.

Located in a bay west of Clarence Town on Long Island, Bahamas, the 180-acre piece of land was up for sale in 2013. While the bay has stunning views and a beachfront villa, the main reason for it’s extraordinary large price tag of $24 million was simply because of Dean’s Blue Hole. Considered one of the top 77 Natural Wonders of the World, it has become a huge go-to spot for extreme athletes.

Due to the remoteness of the hole, tourists are less frequent as you first may think. Free divers however who specialise in swimming to huge depths with no equipment are fascinated by the hole. And no more so than William Trubridge, who sent the world record for diving down Dean’s Blue Hole to 331 feet with only one breath. 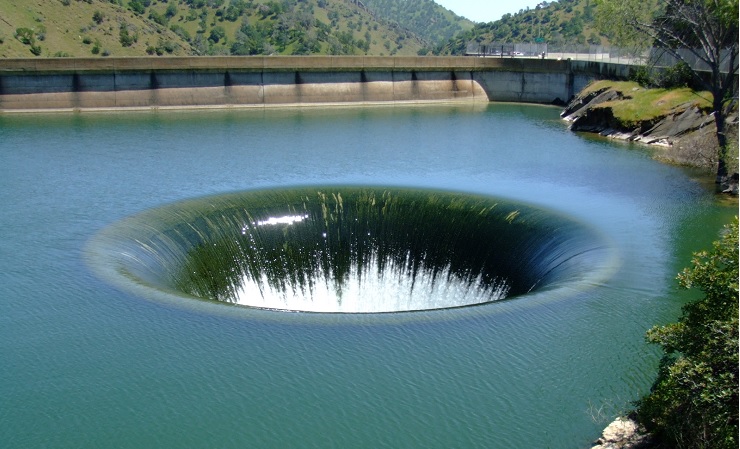 The Monticello Dam which creates Lake Berryessa is currently the 7th largest man-made lake in all of California, USA. While the dam in itself is impressive and a sight for sore eyes, the Monticello Dam is most famous for it’s spillway (also known locally as “The Glory Hole”).

Acting like an overflow channel on a kitchen or bathroom sink, this uncontrollable spillway has a diameter of 22 metres (72 ft). During the time when the lake is at it’s peak capacity, the spillway can drain up to 48,400 cubic feet per second.

Due to the sheer force of water that is funnelled through this hole, swimming near the hole is strictly prohibited.

During the dry months, the exit of the spillway is a well known skateboarding hot spot and is used as a full-pipe. 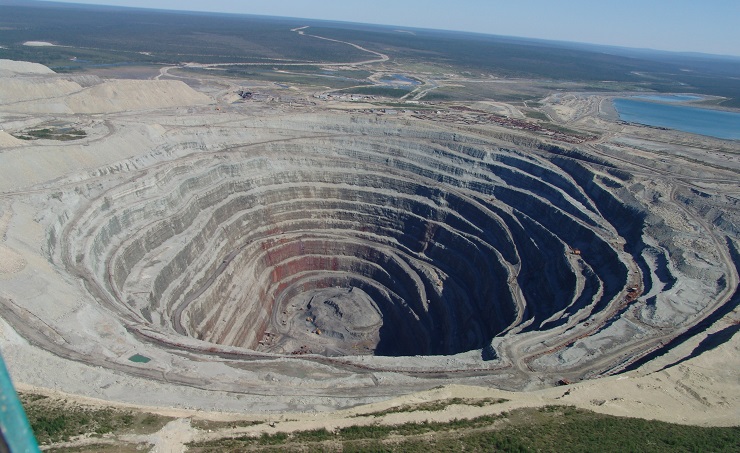 While the Udachnaya Pipe may only be the third deepest open-pit mine in the world after the Bingham Canyon Mine and Chuquicamata mine (which produce copper and gold respectively), the Udachnaya Pipe is famous due to the sheer amount of diamonds it holds.

The Udachnaya Pipe was found just two days after the discovery of the diamond pit Mir (also located in Russia). 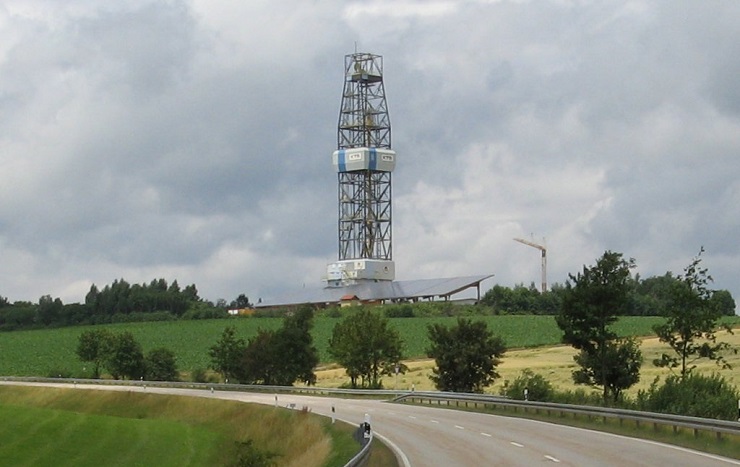 In 1990, a group of scientists wanted to drill the deepest hole ever made into the earth in southern Germany. Although The German Continental Deep Drilling Program ran out of funding, they did manage to learn a lot about the the earth by reaching a depth of 9,101 metres.

During the drilling, they reached up to 315 degrees celsius (600 degrees Fahrenheit), which was hotter than originally expected.

While the drilling has stopped, the borehole is still accessible to scientists. Researchers from the Germany Research Center for Geosciences recorded natural sounds from the hole six miles below the surface of the Earth.

To this day, is it still unclear as to what is exactly making those sounds. 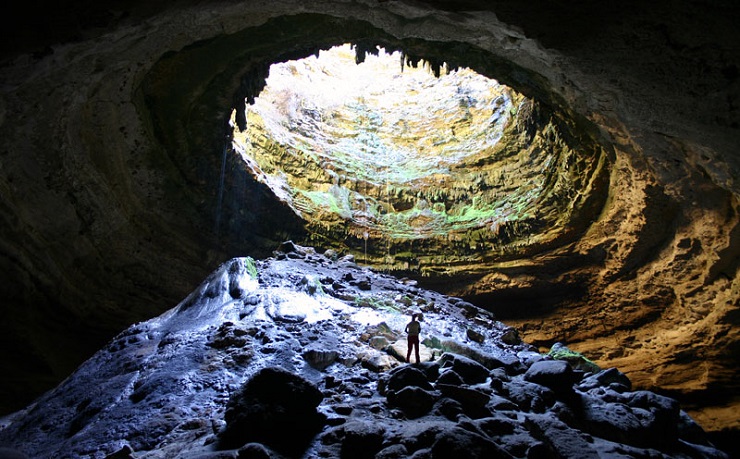 The Devil’s Sinkhole is home to some several million Mexican free-tailed bats, who emerge at sunset around the month of April through to October.

Located near the city of Rocksprings, Texas, the 400 feet deep hole has become a popular tourist attraction. With it becoming so popular, access to the area is only available through advanced planning and reservations. Evening bat flight tours, guided nature hikes and picnic areas are available to the public.

There are many stories as to the history of this sinkhole, from being raided by treasure-seekers and artifact-hunters to being used as shelter by travelling cowboys. Arrowheads and dart tips have been found which have been dated back to 4000-2500 B.C.

But what is for sure is that the hole was formed by years and years of water erosion. 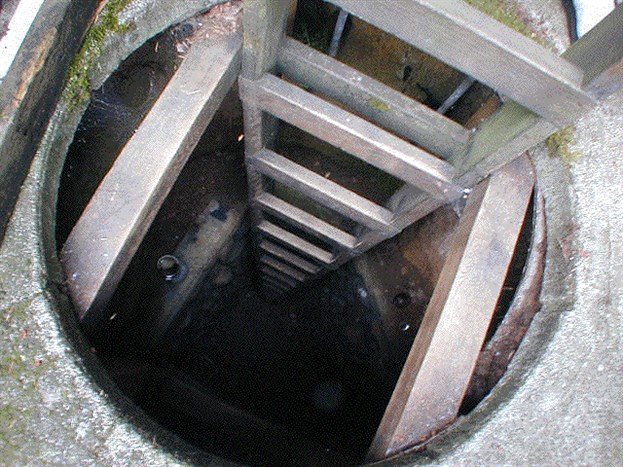 Located in the owner and promoters (Pastor Barron) back garden in the American state of Oregon, this hole is truly mysterious. The depth of the hole has never been accurately measured and estimates vary greatly. But the overall consensus is that the hole is “very deep”.

The real mystery comes from the question “why was it dug?”. The owner, Pastor Barron, doesn’t know himself and says it may be an Ancient Indian Kiva, an outpost made my aliens, an unfinished bomb shelter from the 50s or that someone may have just wanted to dig a really big hole.

For people wishing to descend down the hole, they must sign a waiver first which reads “I, the undersigned, do hereby certify that I must be out of my mind to climb down into a damp, dark hole, when I’m perfectly safe where I am.”

Odd as it may sound, people still wish to visit The Mystery Hole. As to how the hole was actually formed, maybe we’ll never know. 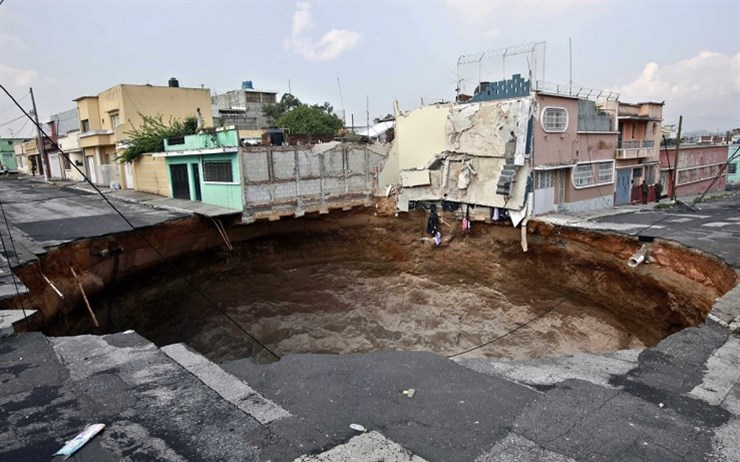 Unfortunately, the risk of sinkholes occurring in Guatemala City is high and unpredictable. The aftermath of sinkholes can be devastating to nearby residents.

In 2007, a 100 metre (328 ft) sinkhole was formed due to sewage pipe ruptures. The devastating collapse caused five deaths and over a thousand people had to be evacuated in fear of the sinkhole getting bigger.

Following the event, the hazards around the pipelines have since been mitigated and improved, but residents still had fears of further catastrophes.

Three years later, in 2010, another sinkhole formed which was approximately 30 metres deep (100 ft). This one swallowing a three-story factory and killed at least 15 people. These disasters have seen the residents call for the government to inspect the sewer system more regularly. 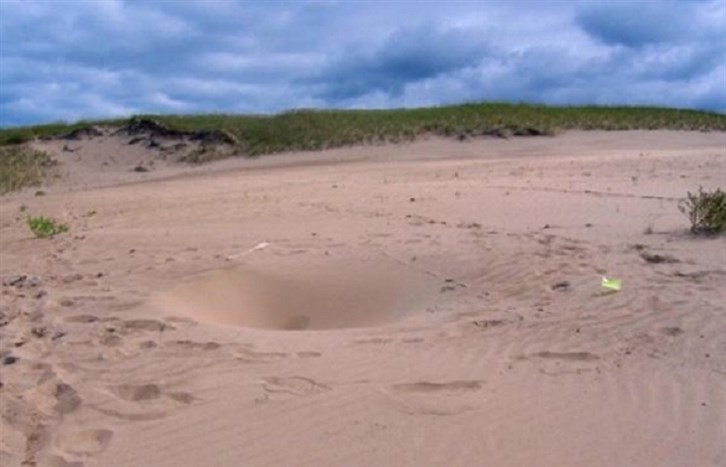 In 2013, a six year old boy was traversing the sand dunes of Mount Baldy when he was suddenly swallowed by a sinkhole. The boy thankfully was recovered after three hours of difficulty. Ever since, random sinkholes have been appearing on the sand dunes which led to Erin investigating the area.

But to this day, Mount Baldy’s sinkholes are still a mistery. The whole landscape of the area is made up of sand, which does not create air pockets under the surface. In order for sinkholes to form, air pockets must be present, so Erin and other fellow geologists are baffled.

In order to combat this mystery, grasses have been planted in the hope that they will help secure the ground from shifting so much. 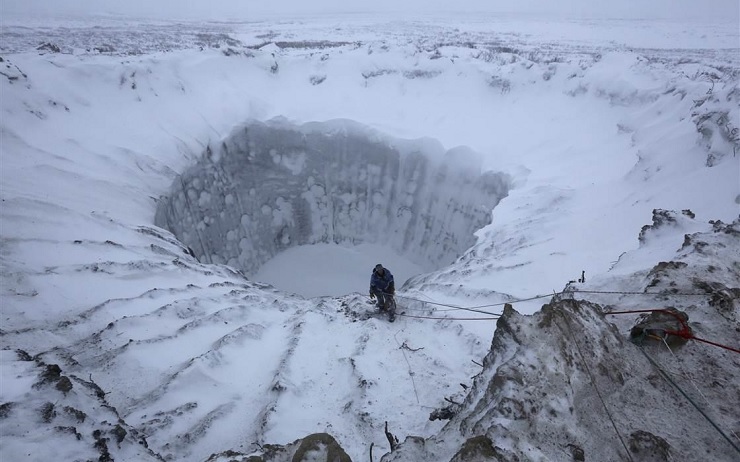 Over the past few years, a series of craters or holes have been found which have left scientists and locals puzzled as to how they were formed.

Each crater has been described to have a ‘ring of debris’ around the edge which seems to indicate that the force in which created the hole came from within the Earth. Such theories like stray missiles, pranksters, gas pipe leakages and even extraterrestrial involvement have been batted around.

But researchers recently have claimed they may have found the reasoning behind the sudden appearance of the holes. During the summers of 2012 and 2013, the average temperature was warmer than normal by 5 degrees which led to the land thawing out more rapidly.

This process then released methane that had been trapped in the icy ground, and due to the higher than normal concentration of methane, the craters were formed. 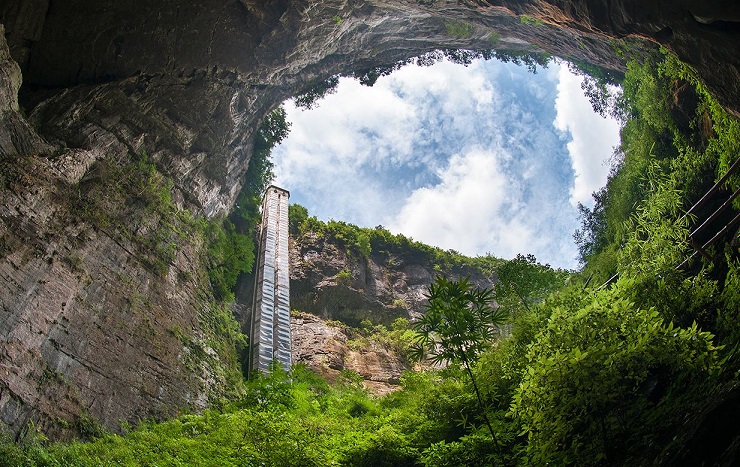 The Heavenly Pit or The Xiaozhai Tiankeng which it’s also known as it the world’s deepest sinkhole, located in Chongqing Municipality, China.

Coming in at 537 metres wide and between 551 and 662 metres deep, the Heavenly Pit is a sight to behold. It was discovered in 1994 during a search for a new exploration site in the China Caves Project. Although, The Heavenly Pit has been well known to the local people for 100s of years.

Xiaozhai is the name of an abandoned village nearby which literally means “little village”. “Tiankeng” means Heavenly Pit.

Due to the wondrous nature of the sinkhole, a 2,800 step stair has been constructed to help facilitate tourism to the area.

Because of it’s gigantic size, base jumpers often travel to The Heavenly Pit to get their adrenaline fix.